Helen Rainger reflects on her experiences travelling to Mae Sot, and explores how the partnership between SFAC and Global Child Advocates (GCA) helps to support children and families in Thailand. Images and quotes have been selected and prepared by Maya Tyrrell.

Going to Mae Sot in Thailand as a tourist was a warm and lovely thing. All the usual tourist experiences, fabulous food, great coffee, temples, scenery and waterfalls. For me, there was the added delight of staying with Thai friends who were our guides and hosts on our touring.

But… (there is always a but). In Mae Sot, as in every place around the globe, there are people who struggle. And that is where the work of Global Child Advocates (GCA) and SFAC (Strengthening Families And Children) comes in; and that too is a warm and lovely thing with the added ingredients of hard work, solid structure, strategic planning and extensive collaboration.

May I start with a story. Myia* came into GCA’s emergency care when she was two months old while her mother received emergency treatment for her tuberculosis. Myia’s father had left before Myia was born. Sadly, the health of Myia’s mum continued to deteriorate and when Myia was two years old, her mother died. Planning began for a long-term placement.

Daniel, from GCA, continues the story. At the Early Childhood Development Centre, it became evident that Myia was in some way removed from her situation and did not engage with those around her, particularly with her carers.

Just at that point in Myia’s story, in 2016, Caitlin and Mick from SFAC came to Mae Sot to lead further training. We spoke briefly with Caitlin about Myia and when Caitlin returned home (to the UK), she sent us some suggestions for how to help Myia as she struggled with forming attachments to those around her.

We followed Caitlin’s advice about the ways in which children form attachments. One worker in particular worked to show Myia that she was loved and cared for.

We saw the change in Myia. She had learned to trust. 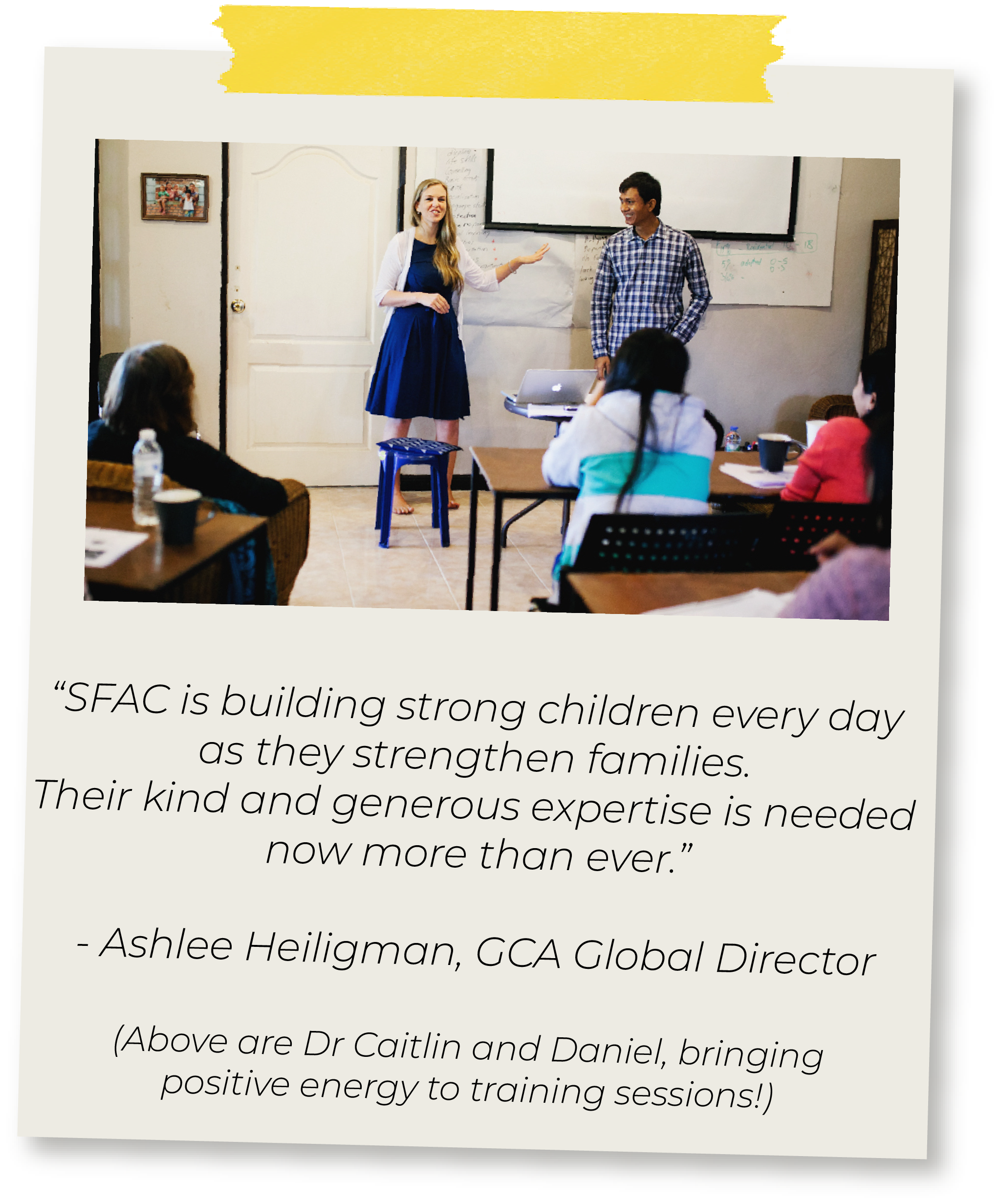 This story has an added part to the happy ending, something that will not happen in exactly the same way for all children but an example nonetheless of finding just the right foster family where support within the child’s family is not possible.

Jo Lin was the worker at the childcare centre who became close to Myia. She and her husband were about to move back to Myanmar and after due consultation and much prayer, they offered to be Myia’s ‘forever family’, making a long-term commitment to being Myia’s parents.

Who are GCA? What do they do?

I will now fill in some of the land around the subject so that you will know a little more about GCA and SFAC and the work that they do.

Global Child Advocates are presently focusing on their work in Mae Sot, in north-west Thailand on the border with the Karin State in Myanmar.  The border is usually, outside of COVID and a military coup, quite a porous one and people may move between the two countries but there are many people who come across the border and form permanent migrant communities within Mae Sot.

GCA had taken preliminary steps towards establishing a presence on the other side of the border in Myanmar but that has been put on hold. I will refer frequently here to Daniel, the Asia Director of GCA and the prime mover and shaker in Mae Sot.

The administration of GCA is based in Texas in the US and is in the capable hands of Ashlee Heiligman, the Global Director and herself a social worker, and others such as the Board members. GCA is a Christian organisation and has links with similar Christian organisations working in other countries. 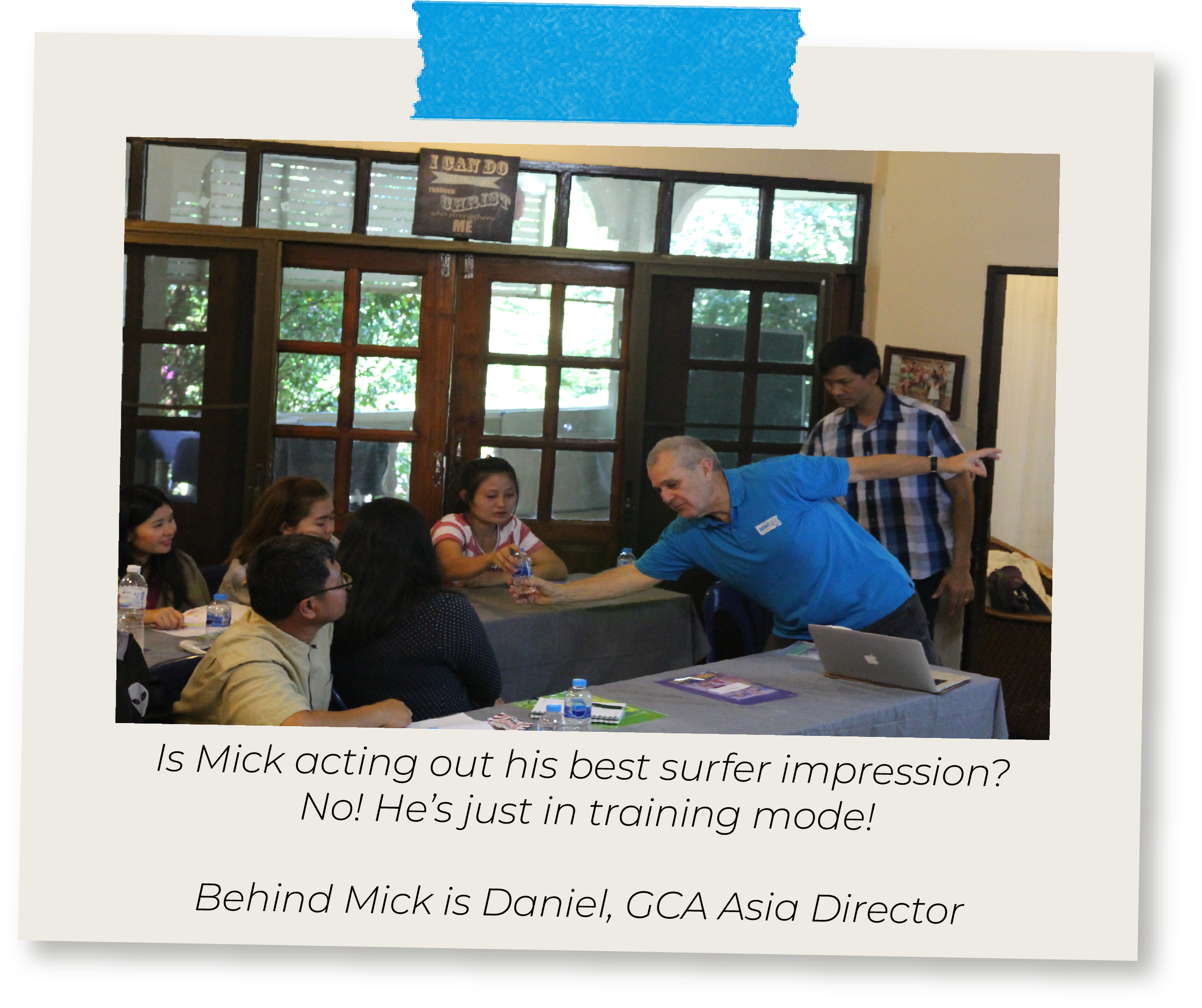 Now, just a word or two about three people within SFAC. Mick Pease, Dan Hope and Dr Caitlin Lance Hope have been the key players who have visited Mae Sot, Myanmar and the USA and conducted training sessions.

Mick Pease was the founder of SFAC. He tells his story and that of SFAC in the very readable, Children Belong in Families: A Remarkable Journey towards Global Change.

Dan Hope is a social worker and Caitlin is a psychologist and both bring their professional training and expertise to their roles. Daniel speaks affirmatively of what he has learnt from the SFAC workshops which have covered topics not only about the basic philosophy but also all the how to’s including how to connect with, assess and support children and families and also how to find, screen and support foster families and carers.

The Impact of SFAC's Training

The link between GCA and SFAC is a continuing one, beginning in 2013, and has largely been centred around these training sessions at particular times. But the crucial link between GCA in Thailand and SFAC as a supporting organisation, was the way SFAC led Daniel and his workers to a very different philosophy and set of values than they had started with.

They came to see that their practice of running residential facilities for children was not what children wanted or needed and saw a new way, that of family-based care, whether birth families, kinship care in the extended family, temporary care or long-term foster families termed appropriately forever families. Daniel now seeks to spread the word in the broad range of training workshops he delivers.

I have illustrated at the beginning of this article how a new forever family may be the best form of support for a child if the preservation of the family is not possible. A blend of these two models may also occur.

Two young girls were found on the streets of Mae Sot by the Thai Department of Welfare and referred to GCA and a caseworker. There was a time where they would have been cared for in a children's home long term but, as we know, GCA's approach had changed as a result of working with SFAC. After interviewing the sisters and gradually unravelling their story, which did change over time, it turned out that the girls were not orphans as they had said but had experienced (non-family) abuse. For a while, they stayed in the GCA Emergency Care but as relationships were built and a long-term safety plan was worked out, it became possible for the children to be reconciled with their family, with both their mother and father committed to their care. Thus, reunification of families can be achieved and support for the family continues.

As well as showing one model for care of children, this story also serves to illustrate the working together of different groups within Mae Sot.

Whether it be Government Departments, local police, a crisis hotline, other entities such as churches, or just word of mouth, many people work together as children are connected with GCA and other support organisations. GCA has its own Community Outreach Team and also works with about 20 other organisations as they connect with different services to provide the children and families with just what they need. 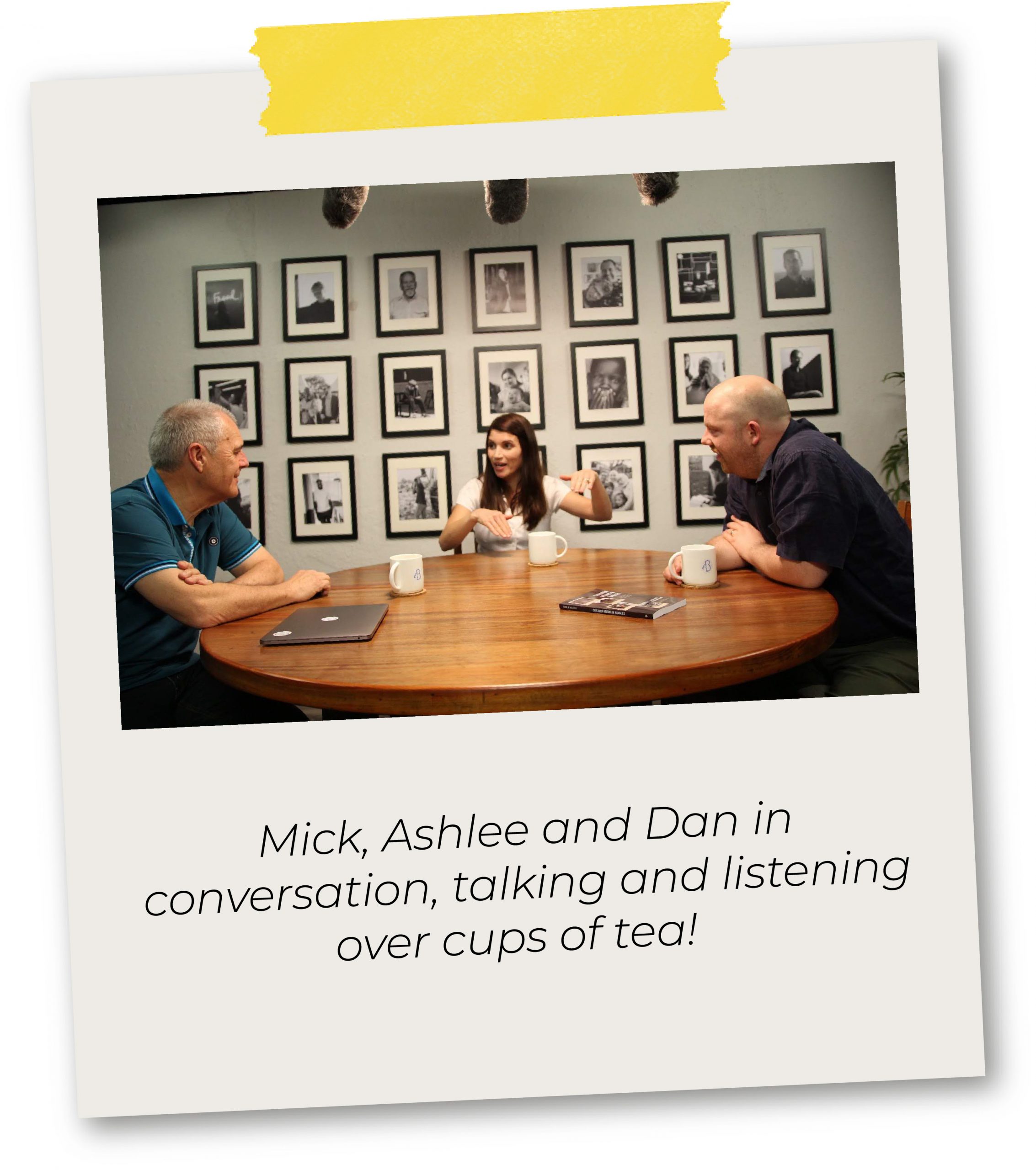 Tin Tin Oo first came into contact with GCA when she was pregnant with her fifth child. The family had crossed the border from Myanmar and life continued to be a struggle. The two oldest children would seek out ways to make money such as collecting bottles and collecting the refunds to buy food for the family.

Tin Tin Oo’s husband left the family and for other people and times and places, this may have been a time when the children would be placed in an orphanage if it hadn't been for the training with SFAC, both in the importance of family care and in how to assess safe alternatives. Tin Tin Oo was determined that the family would stay together and the GCA caseworkers were able to help. Her oldest daughter began to attend the GCA Sojourn Studio, making jewellery which she was able to sell to bring money to the family, as well as enjoying further education and other activities. At school she won the award for top migrant student.

When Na Ling Ton, the baby of the family, turned two, he began at the GCA Early Childhood Development Centre. Tin Tin Oo now has work. The family’s circumstances have indeed changed and Tin Tin Oo is grateful to GCA and the way they have helped her family.

As she has said, loudly and clearly: “The best place for my children and for me is together.”

I have not explored here how COVID-19 has impacted on the lives of people in Mae Sot. Whilst cases have been minimal there have been lockdowns and isolation and an effect on the local economy and work opportunities such as migrant work and tourism have been affected. The military coup in Myanmar has affected border communities and our thoughts are also with the people of Myanmar in this violent and tragic situation.

*Names have been changed to protect and respect the individual’s privacy.

Helen Rainger lives in Australia. She is a retired teacher with an interest in global politics and humanitarian and social justice concerns. She is President of the Australian organisation, Palestine Israel Ecumenical Network. Helen travelled to Mae Sot in January 2020.

Notes from the SFAC team

Our work with GCA has involved the following:

The various methods of training have covered some of the following topics:

We use cookies on our website to give you the most relevant experience by remembering your preferences and repeat visits. By clicking “Accept”, you consent to the use of ALL the cookies.
Cookie SettingsACCEPT
Manage consent

This website uses cookies to improve your experience while you navigate through the website. Out of these, the cookies that are categorized as necessary are stored on your browser as they are essential for the working of basic functionalities of the website. We also use third-party cookies that help us analyze and understand how you use this website. These cookies will be stored in your browser only with your consent. You also have the option to opt-out of these cookies. But opting out of some of these cookies may affect your browsing experience.
Necessary Always Enabled
Necessary cookies are absolutely essential for the website to function properly. These cookies ensure basic functionalities and security features of the website, anonymously.
Functional
Functional cookies help to perform certain functionalities like sharing the content of the website on social media platforms, collect feedbacks, and other third-party features.
Performance
Performance cookies are used to understand and analyze the key performance indexes of the website which helps in delivering a better user experience for the visitors.
Analytics
Analytical cookies are used to understand how visitors interact with the website. These cookies help provide information on metrics the number of visitors, bounce rate, traffic source, etc.
Advertisement
Advertisement cookies are used to provide visitors with relevant ads and marketing campaigns. These cookies track visitors across websites and collect information to provide customized ads.
Others
Other uncategorized cookies are those that are being analyzed and have not been classified into a category as yet.
SAVE & ACCEPT
Scroll to Top